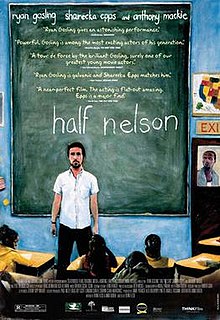 Half Nelson is a 2006 American drama film directed by Ryan Fleck and written by Fleck and Anna Boden. The film stars Ryan Gosling, Shareeka Epps, and Anthony Mackie. It was scored by the Canadian band Broken Social Scene. Gosling was nominated for the Academy Award for Best Actor for his performance.

The story concerns an inner-city middle-school teacher who forms a friendship with one of his students after she discovers that he has a drug habit. The film is based on a 19-minute film made by Boden and Fleck in 2004, titled Gowanus, Brooklyn. It premiered in competition at the 2006 Sundance Film Festival. It was released theatrically on August 11, 2006.