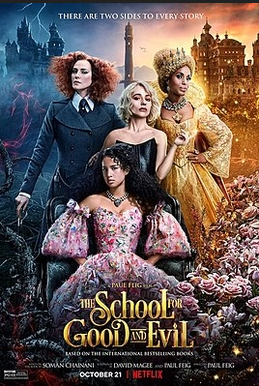 The School for Good and Evil is a 2022 fantasy film directed by Paul Feig, who co-wrote the screenplay with David Magee, based on the 2013 novel of the same name by Soman Chainani.  The film stars an ensemble cast by Sophia Anne Caruso as Sophie and Sofia Wylie as Agatha, two best friends sent to the Schools for Good and Evil. After their fortunes are seemingly reversed, their friendship is put to the test.

The film’s development began in 2013, when the rights to the novel were acquired by Roth/Kirschenbaum Films and Jane Startz Productions, with Universal Pictures initially set to release the film. After the project languished in development hell, Netflix took over in 2017, and Feig was hired to direct three years later. Principal photography took place in Northern Ireland between January and July 2021.

The School for Good and Evil was released on October 19, 2022, by Netflix. The film received mostly negative reviews from critics, who praised its cast and visuals but criticized the narrative and storytelling.