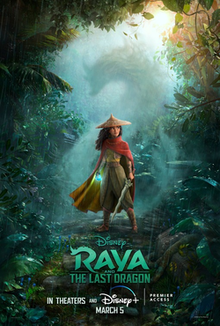 Raya and the Last Dragon (/ˈraɪ.ə/ RYE-ə) is a 2021 American computer-animated fantasy adventure film produced by Walt Disney Animation Studios and distributed by Walt Disney Studios Motion Pictures. The 59th film produced by the studio, it was directed by Don Hall and Carlos López Estrada, co-directed by Paul Briggs and John Ripa (in their feature directorial debuts), and produced by Osnat Shurer and Peter Del Vecho. The screenplay was written by Qui Nguyen and Adele Lim, both of whom also wrote the story with Hall, Estrada, Briggs, Ripa, Dean Wellins, and Kiel Murray. The film is based on traditional Southeast Asian cultures.

Featuring the voices of Kelly Marie Tran, Awkwafina, Izaac Wang, Gemma Chan, Daniel Dae Kim, Benedict Wong, Sandra Oh, Thalia Tran, Lucille Soong, and Alan Tudyk, Raya and the Last Dragon is about the titular warrior princess, Raya. She seeks out the fabled last dragon hoping to restore the dragon gem that would bring back her father and banish the evil spirits known as the Druun from the land of Kumandra.

Walt Disney Studios Motion Pictures had planned to release Raya and the Last Dragon in theaters in the United States on November 25, 2020, but the movie was delayed to March 5, 2021 due to the COVID-19 pandemic. The film was simultaneously available on Disney+ Premier Access as a result of the COVID-19 pandemic’s effects on movie theaters.

In July 2021, shortly after its premium access run, the film became the second most-viewed streaming title behind Netflix‘s fifth season of Lucifer. The film became the third most streamed movie title of 2021, and has grossed over $130 million worldwide and received positive reviews from critics, who praised the animation and voice acting. The film received various accolades, including a nomination for Best Animated Feature Film at the 94th Academy Awards, and was nominated in the same category at the 79th Golden Globe Awards. However it lost both awards to another Disney film, Encanto. Raya and the Last Dragon also led the 49th Annie Awards with ten nominations, but did not win in any of the categories. 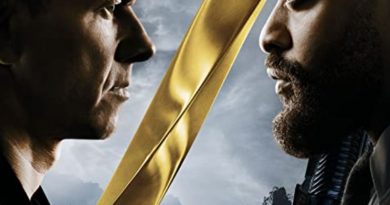